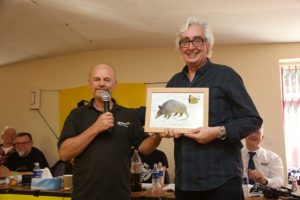 MAG held its Annual Group Conference (AGC) in the small town of Manea, Cambridgeshire, over the weekend of 29th September- 1st October, 2017.  The well-attended event demonstrated the confidence and momentum that has been building over the last few years.

Selina Lavender, who was re-elected as MAG’s Chair, said ‘the AGC’s mood and determination to maintain the gains in terms of influence and action underline the confidence of the movement in promoting riders’ rights locally, nationally and internationally.  When we reviewed the extent to which the riding community has engaged with local authorities, ministers and other key bodies such as Highways England, it’s impossible to ignore the strides we’ve taken over the last few years.  One target for us now is to continue attracting new members.  The dramatic rise in membership across London shows it’s very possible to achieve this, and we just need to get the message across that signing up is an act of self-interest, to protect your own rights as a rider.’

The AGC also learned of Dr Leon Mannings’ announcement to retire from his role as Policy & Campaigns Advisor after seven years.  In an emotive speech, he shared his belief that ‘direct action’ may be increasingly required to get traction with some more resistant authorities.  He also observed that he’d never seen the organisation in better shape.

‘The next step is planning the year ahead to continue with no major course corrections,’ adds Selina.  ‘We’re doing it right and we’re doing it well, and we don’t need to make alterations to a winning formula.  Leon’s departure brings on changes, and we’re considering how best to evolve our structure to get the most out of what we spend and how we spend it.  There’s a lot to campaign on, and we know that crime problems, limits to road space and the pollution agenda will all feature in this.  We expect a lot from ourselves in 2018 because we have a lot of people to represent, and a clear agenda.  It’s looking good and I’m delighted to continue as Chair during such a productive time in the movement’s history.’