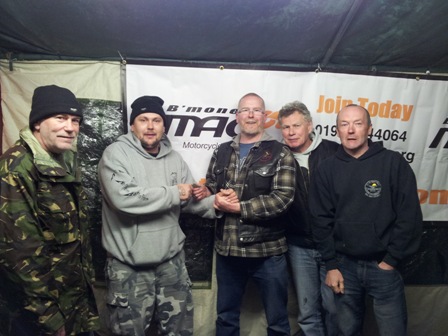 It’s a Friday night in May, the following day is the start of the famous North West 200 races and that can only mean one thing….time for the Nighthawk MCC pre-NorthWest party…YAY!

Members from the MAG group in Ballymoney spent the first part of the evening at the entrance to the party, taking the opportunity to explain to attendees all about the Motorcycle Action Group and it’s work, about the upcoming 24th June demonstration rides, gathering some more signatures on the Get A Grip petition and catching up with old friends, as well as making some new ones.

Later on we moved inside for a beer (or two), to listen to the music and for the usual great craic!

We were all surprised when Ballymoney MAG rep Steven was called to the stage and it was announced that the Nighthawks MCC would like to pay for a gazebo the Ballymoney group had been saving for, to shelter the stand at shows, fairs, etc!

This was a totally unexpected gesture and everyone from the Ballymoney MAG group would like to say a very big thank-you to the Nighthawk MCC for their generosity, it is very much appreciated by all of us.

The gazebo has since had it’s ‘maiden voyage’, it has been very handy and will continue to be used for many a moon to come.

Pictured handing the gift over are Nighthawk MCC members and Steven O’Kane….from left to right……