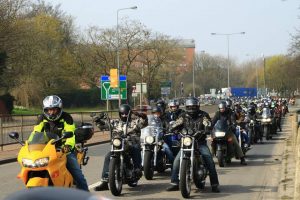 Led by the Motorcycle Action Group (MAG), London’s riders will hold a city-wide day of action this Saturday 21 April to protest against the Mayor’s policies, which are contributing to the mounting deaths of Londoners who ride motorcycles and scooters.

Thousands of motorcyclists will descend on Westminster and then rally near the Mayor’s Office, where they will be addressed by supporters, including Peter Ramsbottom (Labour) and Keith Prince AM (Conservative). Liberal Democrats declined the invitation to send a speaker. Mayor Sadiq Khan also turned down the invitation.

Tim Fawthrop, MAG’s London Regional Representative, said: “For the last two years we have been trying to get the Mayor of London, Sadiq Khan, to uphold his pre-election promises and meet with us but he will not engage in meaningful dialogue”.

Mother and London motorcyclist, Megan Anderson, said: “As a trainee teacher and mother, money and time are tight. I use a motorbike to commute because it’s cheap and quick. Using public transport is cost-prohibitive and takes too long. I wouldn’t be able to get home in time to pick my daughter up from nursery or be able to afford to send her in the first place! A motorcycle is the perfect solution that means I get to spend more time with my family, whilst also dedicating the time and attention needed in order to learn to teach.”

A recent study has shown that the congestion charge has worsened the pollution problem by forcing Londoners from cleaner personal transport onto heavily-polluting diesel black cabs. Sadiq Khan’s ULEZ plans look set to do the same thing, since he is planning to charge virtually zero pollution motorcycles whilst exempting diesel-guzzling black cabs.

London Assembly Member, Keith Prince, a keen motorcyclist who plans to attend the protest, said: “I just don’t understand what Mayor Khan has against motorcyclists. His Deputy, before taking office, said in her report that Powered Two Wheelers were part of the solution to congestion! Now City Hall seems to have declared war on motorbikes and scooters. We know that many key workers are reliant on their bikes yet Mayor Khan wants to tax them off the road! I just don’t get it – it’s madness!”

Mr Prince added: “It could also expose the Mayor and TfL to the possibility of legal action on the basis of discrimination, as he’s disadvantaging the least wealthy in London’s workforce on the basis of an illogical and punitive charge on small motorcycles”.