Following the submission of its Ride COVID Safe White Paper to the Secretary of State for Transport, Grant Shapps, last week, progress has been made and support is growing. 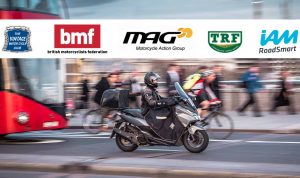 “I very much welcome this initiative and the partnership between the organisations which created it. Motorcycling does have an enormous role to play in any transport policy if we are to see a long term reduction in congestion and pollution, and the Parliamentary Motorcycle Group has long advocated this. The riders’ code announced last week provides invaluable advice to those using motorcycles during the Covid19 crisis, and I urge all motorcyclists to take it into account and ride safe during these extraordinary times. As Chair of the APMG I strongly urge Ministers and the DfT to fully recognise motorcycles as a transport mode”

In a written response to a Parliamentary Question raised by Christopher Chope MP, Rachel Maclean, Parliamentary Under-Secretary (Department for Transport) and MP for Redditch stated:

“The Department’s guidance issued on 12 May refers to ‘Private cars and other vehicles’ as an alternative to using public transport, and encourages the public to ‘consider all other forms of transport before using public transport’. This would include private vehicles such as motorcycles and mopeds where the journey to be made is appropriate.

Motorcycles are an important way of getting around, and we are working on a number of projects, including sorting out potholes, which are a problem for people on motorcycles and other two-wheeled vehicles. I encourage people to adopt the electric motorbike.”

“IAM RoadSmart strongly support the key role of motorcycling in helping to get everyone around safely and in kick starting the economy as the Covid19 crisis reduces.  It offers a winning combination of instant social distancing and cheap and efficient travel.  We can’t wait to get back out on the road to deliver our mission to produce safer riders, but for now we have to agree with this report that only essential travel for work or responsible recreation is allowed. “

The Coalition still awaits a formal response from the Department of Transport.  They have also sought but still await feedback from the Association of Police and Crime Commissioners and the National Police Chiefs Council.

The Coalition has noted much media interest in reporting complaints about motorcyclists’ behaviour, particularly during the first weekend since lockdown restrictions were eased in England.  Less widespread is reporting of the ongoing valuable work of motorcycle riding volunteers such as the Bike Shed Community Response initiative and of long established organisations like the Blood Bikers.  The positives far outweigh the few bad stories making the headlines.

The joint position of the Coalition’s members is that responsible, safe use of motorcycles should be encouraged within the framework of Government guidelines and related legislation.  A uniform approach to policing the regulations will be assisted by clear communication of unambiguous advice.  That is the most urgent element of our proposed guidelines.  Of equal and more lasting importance is recognition of the role of motorcycling in our nation’s transport system. As a transport mode offering social distancing benefits acknowledged by the Department for Transport, motorcycling is, as Grant Shapps has commented, “an enormously important way of getting around”.