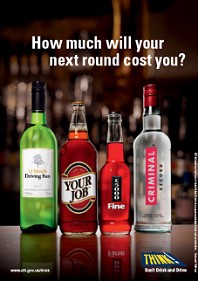 The campaign specifically targets those most likely to drink and drive who have been identified as male drivers between the ages of 17 and 29 years of age.

Previous campaigns have involved ‘shock horror’ imagery but research has shown that this approach makes less of an impact on a generation of youngsters brought up on graphic, violent video games.

This campaign focuses on the shameful consequences of a drink-drive conviction which results in the loss of licence and mobility, loss of job and lifestyle, let alone the personal misery caused by death and injury.

Campaigns Manager David Short said, “Motorcyclists are often the victims of dangerous and careless driving by others. This danger is further compounded if the driver is under the influence of drink. Anything which tackles the menace of drink driving has got to be a good thing and we fully support the Department of Transport and the police in ridding the roads of the menace of drinking and driving.”