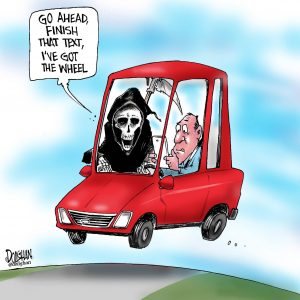 A survey by the National Roads Policing Intelligence (NRPI) Forum about the ban on mobile phone use while driving has enabled bikers to express their views.

MAG has already helped promote a survey into the public’s views on dialing-and-driving set up by the National Roads Policing Intelligence (NRPI) Forum.  Richard Davin of the Forum comments: ‘we launched the survey to capture everyone’s views regarding the legislation changes around using a hand-held mobile phone whilst driving. We wanted to gauge awareness of the change in law and the data collected will help plan future campaigns. We really appreciate all those who filled in the survey and shared it on social media.’

Part of the motivation is a change to the official position regarding penalties for using ahand-held phone when controlling a vehicle.  Mr Davin explains ‘the government is changing the Fixed Penalty Notice and penalty points for the use of a hand-held mobile phone whilst driving. The new legislation will come into effect on the 1st of March 2017.Under the new rules drivers will receive six points on their licence and face a £200 fine.

Tony Cox, MAG’s North West Regional Representative, adds ‘Because many of us responded, more bikers’ opinions will be taken into account. Everyone I know has had a near miss or worse because a driver is chatting instead of driving properly.  By being involved in surveys like this we helped ourselves and others.’

MAG has plenty of evidence to prove that accidents have occurred as a direct result of phone usage in vehicles.  Steve Mallett, MAG’s Deputy South East Representative, runs a regular vigil to highlight the importance of concentrating on driving rather than dialing, an initiative that has generated a lot of media coverage in Kent. MAG invites riders to run their own local campaign. All that is needed is a few people, a large inflatable phone, a sign with a suitable slogan (e.g. ‘Don’t drive and dial’) and a way to record how many ‘driver-dialers’ go past during the hour or two you are at the roadside. Taking a photo could help gain publicity for the campaign and it may help to reduce the jeopardy we face for the sake of a careless call. For tips on how to run the campaign, just get in touch with Steve Mallett through MAG.