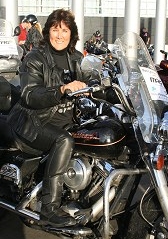 On the 5th September 2007, the Motorcycle Action Group (MAG UK) headed to Europe for the 11th Annual MEP motorcycle ride at the European Parliament in Strasbourg.

Organised by the Federation of European Motorcyclists Associations (FEMA), of which MAG is an active member organisation, the annual ride with Members of the European Parliament was a unique opportunity for riders from all over Europe to exchange ideas and discuss motorcycle issues directly with the decision makers and other stakeholders.

The MAG ‘Euro Team’ of MAG’s General Secretary Trevor Baird, Nev Chamberlain and ex-Chairman, Ian Moore, joined over a 100 participants at the Ride including 15 Members of the European Parliament from 10 member states.

Amongst the patrons was UK MEP Liz Lynne, (Liz passed her motorcycle test in 2003, following her introduction to motorcycling at a previous MEP Ride) who was joined by UK MEPs Roger Helmer and Robert Sturdy, all three MEP?s reassured their continued support for motorcycling issues in Europe.

MAG’s, General Secretary, Trevor Baird says, “Apart from the serious side of the ride, MEPs had the opportunity to experience first hand, the pleasure of motorcycling and to discuss the importance of motorcycles as a personal mode of transport with experts from riders organization throughout Europe. Roger Helmer proved to be the perfect pillion rider and Liz Lynne completed the ride on a Suzuki Intruder.”

The serious side of the ride was the presentation of FEMA’s European Agenda for Motorcycle Safety, which sets out the motorcyclists’ perspective regarding the importance of appropriate road infrastructure and the integration and positive contribution that motorcycles, scooters and mopeds can make in urban areas in Europe.

The four patrons of the event, Helmuth Markov (Germany), Liz Lynne (United Kingdom), Luis Queiro (Portugal), Inger Segelstr’m (Sweden), each gave short speeches at the front of the parliament before the ride and underlined the importance and advantages of motorcycling as well as stressing the importance of consultation with motorcyclists.

The ride has become an essential part of MAG’s lobbying and is one of the most popular events for European parliamentarians.

It also gives grassroots members the opportunity to participate at first hand and to represent MAG at European level.