Highways England continues to be a role model for action following its Motorcycle Infrastructure Sub-Working Group meeting on 17th April 2018. 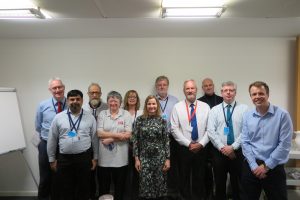 Lembit Öpik, MAG’s Director of Communications & Public Affairs, regards this as ‘amongst the most productive project groups in our Political Unit’s calendar. Rarely have I seen a team which delivers so much and so well – in this case with a task list 28 pages long.’ These include:

‘We got through a lot,’ adds Jimmy Torrance, Manchester MAG Representative and fellow member of this sub-group. ‘You know, they actually listen to riders. Road surface issues are a direct test – if Highways England does repair more dangerous potholes and resurfaces slippery manhole covers,that would prove the group’s usefulness.’

If you have specific concerns about major roads, please let Lembit or Jimmy know, and they can raise these issues at the sub-working group.