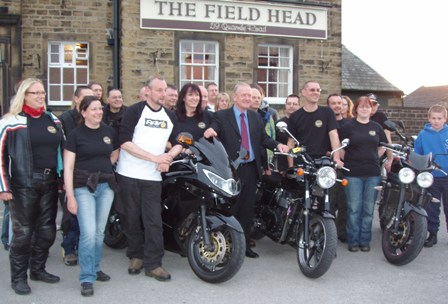 Following comments made last month by Barry Sheerman (Labour Candidate for Huddersfield), when he famously called motorcyclists ‘widow makers’ and urged everyone to talk their friends out of getting a bike and instead advise them to use a car, his electorate held him to account last night at the Field Fare pub in the town.

Apart from his obvious lack of environmental understanding, the comments were particularly worrying as Mr Sheerman is a director and chair of the Parliamentary Advisory Council for Transport Safety (PACTS).

After a concerted campaign to bring his comments into the wider public arena, Mr Sheerman tabled EDM1246 before Parliament was disolved and agreed to meet local MAG members and explain his comments, as well as answer other questions about his attitude to motorcycling.

EDM1246 calls for the recognition that ‘appalling car driving’ is a large contributory factor in motorcycle incidents and must be addressed.

Over 30 MAG members attended the meeting, which was a great example of how riders can bring their representatives to account and how direct lobbying can work.