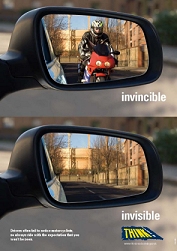 The latest road safety campaign from the DfT Think! campaign makes a good pictorial point about the limits of a car’s mirrors, but goes on to make some worrying noises about what we should be wearing.

The stats around riding and accidents paint an unbalanced picture: there are around 1.5 million motorcycles on the road in the UK making up 1% of road traffic, (this means vehicle miles) but contradictory to this, riders make up 18% of road fatalities.

And to top that off, motorcyclists are 30% more likely to have an accident than someone driving a car. So, if the stats are not on our side with the way we ride, what else can be done to reduce the number of accidents?

First up, make safety your primary concern and ride with the expectation that you won’t be seen – the majority of motorcycle incidents happen at road junctions, 65% of these often fatal incidents occur when a driver fails to notice a bike, so if you’re unsure that another motorist hasn’t spotted you, steer on the side of caution.

Decent gear and awareness at junctions are clear signs of a good rider. Other road users may be a lot less impressed by speeding and overtaking.

The second thing is something you should take into account before you start your engine – your clothing. Wearing helmet to heel in black might suit your style, but it makes it much harder for other drivers to spot you. Headlights, reflective gear or a vibrantly coloured helmet could make all of the difference to when other road users see you.

However, a more reassuring way to soup up your skills may be to sign up for an advanced riding course.

Whether you study for two hours or two weeks, it will make you safer. And it could prove to your insurers that you deserve cheaper premiums.

The Government have a target of reducing the number of killed or seriously injured people on the road by 40%. They plan to achieve this by 2010, so the next time you head off on your bike be aware that you need to look after yourself, because not everyone is looking out for you.

If you’d like to order this poster, free of charge, for your club, shop, or anywhere else you can think where riders would notice it please call 0870 1226236.

“THINK! Take longer to look for bikes”, Campaign and links to video which has been rerun national television HERE

MAG policy has always been opposed to the idea of compulsion on clothing standards, not that is being proposed here of course but historically, the success of voluntary use campaigns has been followed by legislation.

Few things are more dangerous than feeling safe, yet anecdotal evidence suggests that riders do feel they are safer when using headlights in daytime and wearing bright clothes.

Believing you’re invisible seems like the most realistic attitude to adopt.

The empty mirror would still be empty if the out of shot rider was dressed like a clown.

MAG’s Regional Rep in Scotland, Steve Wykes gives a perspective on the ‘peak’ of Killed and Seriously Injured (KSI) that are presented especially in the press at the start of the biking season.

Since I have been actively involved at a national level with MAG UK every year we are presented with a peak of KSI accidents at the start of the biking season. As soon as we have a spell of good weather those who have laid their bikes up over winter hit the streets and try to get the cobwebs out of their systems with all too frequently tragic results.

At least part of the problem is that they don’t realise how much their riding skills, judgement and hazard perception have deteriorated during the time their bikes have been laid up. This coupled with a desire to explore the performance of their bikes after months of using more utilitarian transport is a bad combination.

Of course, there will always be riders whose attitude and riding is never up to scratch, but their numbers are undoubtedly bolstered by those who can ride more sensibly, but whose skills are very rusty and who are caught up in the buzz of getting back on their bikes.

I am reminded of a comment from one of our local instructors who stated that one of our biggest problems is what he described as “perpetual learner syndrome” i.e. just as they are developing adequate riding skills at the end of the season, the bike is laid up and they start from scratch the following year.

What can be done to reduce this problem?

Part of the solution has to be to ensure that those that are perpetual learners, due to laying off their bikes, use their bikes more frequently minimising the time that they are off the road.

This requires positive measures to encourage use throughout the year for commuting and other trips, rather than just for a sunny Sunday blast.

Councils and local authorities have a role to play in integrating bikes into transport policy by providing secure parking allowing access to bus lanes etc.

This could help increase the proportion of riders using their bikes more regularly helping improve the skill levels. I have yet to talk to a rider who has used their bike over winter who has not learned to ride more smoothly as a result. Plus if you are using the bike year-round you do not have the same urge to just go for a blast.

What else could be done?

Perhaps a little controversial here, but a possible solution for those who continue to lay their bikes up might be a refresher course at the start of the season.

If this could be encouraged on a voluntary basis with help from the training industry i.e. free or heavily subsidised so that cost is minimal then this could reduce the early season carnage.

An idea worth exploring with the Motorcycle Rider Training Association (MRTC) or the Motor Cycle Industry Association (MCIA) perhaps, before we are faced with draconian legislation which ends up legislating us all off the road.

As for the ‘power ranger’ brigade, I’m afraid the only solution is enforcement, rider awareness courses etc.. though through talking to the police involved in Bikesafe there is a gap here in so much as rider awareness courses are only offered to those riding carelessly or committing minor infringements (I stand to be corrected), those exhibiting more dangerous behaviours go straight into the prosecution system.

Points and fine then straight back to their previous behaviour more often than not. Here I believe there is scope for compulsory rider awareness or even advanced training in return for reduced penalties.