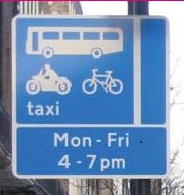 MAG has praised the decision by Brent Council in London to allow bikes in bus lanes for a trial period.

This move was given the thumbs-up by the Highways Committee and received overwhelming support.  The decision, which is reported in full on Brent Council’s website, contains plans to progress the pilot scheme in the first quarter of the new financial year.  ‘This project will help the Council let bikers know they’re free to use the bus lane on this important route,’ explains London MAG’s Regional Representative, Tim Fawthrop.  ‘I told them we’d be delighted to share the good news and give credit to the Local Authority who have come a very long way in terms of their bike-friendly policies over the last couple of years.  I’m wondering if this move makes them the most bike-friendly borough in London?’

MAG’s Campaigns and Policy Adviser, Dr Leon Mannings adds, ‘This is a classic example of how MAG helps Local Authorities tackle problems.’   The move follows over three years of dialogue with Brent, following the antics of a handful of individuals on bikes that caused mayhem on the Rainsford Road. ‘We agreed steps to stop the hooligan element in their tracks’ adds Leon.  We also helped clarify the positive role of motorcycling and ways to improve conditions for the vast majority of people who ride motorcycles in or through the Borough responsibly.

Tim has been in regular talks with Sandor Fazekas, Project Development Manager for Highways & Infrastructure at Brent Council, leading to new policy that was implemented on March 27th. The scheme permits bus-lane usage on the A404 Harrow road.  Their Brent Rider, Bike Safe, and Good Egg road safety initiatives make biking safer and more accessible throughout Brent. There are also plans for 30 new vehicle-activated LED ‘slow down’ signs which will include a Think Bike message.   ‘It’s worth noting that we began all this when the council wanted to permanently ban bikes from certain areas,’ adds Tim.  ‘The final result is more access, not less, and that’s fantastic.  Brent has been great to work with and have set high standards of constructive engagement that we hope other Authorities will rise to.’

Find out more and read the decision at: