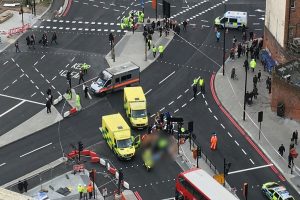 MAG adds weight to questions about the rise in motorcycle deaths in London, and why this has not led to a level playing field in how motorcyclists in the city are treated.

MAG’s London Regional representative, Tim Fawthrop, has joined calls for a review of how Transport for London (TfL) allocates funds, in the light of shocking figures showing that over three times more bikers were killed in London compared to cyclists.  Tim says, ‘Anton Shelupanov, who’s a Justice reformer and motorcycle safety campaigner, has rightly highlighted in a Huffington Post article that, compared to a five-year average, motorcyclist deaths in 2016 increased by 13% while other modes of travel have experienced a decline in fatalities.  Thirty-three bikers died compared to just eight cyclists.  As Mr Shelupanov points out these are real people: a carpenter, courier, tube driver and respected Scout leader among them.   One was killed at a junction that has recently been made MORE lethal for bikers by a redesign.

‘It can’t be right that motorcycle deaths are up while cycle and car deaths are down by almost half.  The Greater London Authority (GLA) and TfL have all the information they need to address this with a TfL handbook, which explains exactly how to do it.   For some reason, TfL doesn’t seem to pay attention to it and the result is an increase in fatalities.

‘The Mayor has previously made highly supportive comments regarding motorcycling in London, so we assume he means it and wants London to do better.  That requires reversing some of the mad and dangerous schemes like light segregation, which is a trip hazard to everyone, and a revisit of junction changes and lane narrowing – which are literally lethal to bikers.

‘Bikes are part of the pollution and congestion solution, not the problem.  MAG will work with Anton Shelupanov and We Ride London to get a level playing field that looks at the most endangered road users in London: not cyclists, but motorcyclists.  We’re paying the price of being ignored in lost lives.  The stakes couldn’t be any higher than that.’