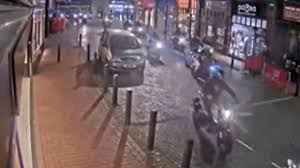 The Motorcycle Action Group (MAG) has applauded the stiff sentences handed out to the organisers of and participants in acts of hooliganism in Leeds and elsewhere on Halloween in 2016.

MAG has expressed its support for the jailing of thirteen thugs who used motorcycles to disrupt Leeds city centre last year.  Together, they have been jailed for a total of almost fifteen years.  Prison spells of between twelve months and two years were given to the organisers of the event, which saw more than a hundred riders on motorbikes and quad bikes disrupting traffic and riding through pedestrianised areas in Leeds.

One of the hooligans, David Armitage, who organized the event through social media, was filmed during the incident encouraging “carnage” and telling riders to “shut down” the city centre.  He was jailed for two years.

Selina Lavender, MAG’s Chair, has backed the verdict and the sentences.  ‘As senior police correctly observed last year, these people aren’t bikers.  They’re just hooligans and idiots who happened to be on two wheels.  MAG does not recognise or welcome such people as part of the biking community, and the sentences are an appropriate indication of the treatment people can expect if they disrespect the need for responsible use of bikes.  Nobody involved came out of that incident in a good light.’

MAG is committed to working with the authorities and the law enforcement agencies to ensure that proper bikers are not dragged down by the idiotic antics of a reckless few yobs who thought it amusing to frighten and intimidate the general population.  ‘We love biking not trouble,’ adds Selina.  ‘That’s the genuine biker’s charter, and it’s at the heart and soul of the kind of riding MAG has promoted for over 40 years.’