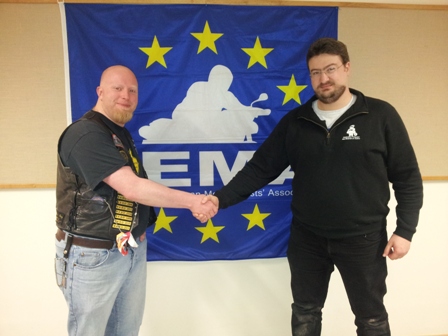 FEMA (the Federation of European Motorcyclists Associations) had their first full meeting of 2013 last weekend in Germany, and we’re pleased to announce that MAG (UK) continues its involvement at the centre of riders’ rights in Europe with the election of Pat Van Aalst as FEMA’s Director of Finance.

Pat already acts as Finance Officer for MAG UK and has an excellent track record, but his nomination and successful election to the FEMA Board of Directors cements MAG’s commitment to FEMA. Pat had the whole-hearted backing of our own National Committee. It’s pure coincidence that he rides an ST1100 Pan European!

FEMA’s current President, Gerard Livett, another MAG UK member and former regional Rep for London, has been in the post for 4 years, but has decided that he should step down. When Gerard was elected to the Presidency he did so on the platform of wishing to protect and enhance motorcycling and he has certainly done that, along with all of the team based permanently in Brussels as FEMA’s respect continues to climb.

It should be noted that both President and Director of Finance are unpaid, voluntary roles, undertaken by individuals committed to ensuring motorcycling survives.