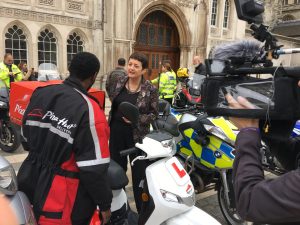 MAG has expressed its gratitude for the progress made during the tenure of London’s Deputy Mayor for Transport, Val Shawcross, who has announced her decision to stand down from the post.

MAG’s Director of Communications & Public Affairs, Lembit Öpik, has offered his personal best wishes to Val Shawrcoss, who has headed up the Transport for London brief on behalf of the Mayor of London for two years.

‘Before Val, bikers had a hard time being heard in the Greater London Authority – or in TfL. It’s fair to say both relationships took a great leap forward during Val’s tenure, with the Easy Rider report clearly being a major progression in commitment to a sensible policy towards powered two wheelers. We’ve got various issues to resolve with the authorities in London, such as the unfair Ultra Low Emission Zone Charge and the lack of progress on dealing with motorcycle-enabled crime. However, we wouldn’t even be at the table if it hadn’t been for Val. On behalf of MAG, I’d like to extend a big thanks to her, and hope that we’ll get her onto a motorcycle again before long!’

Val’s role as Deputy Mayor for Transport is being assumed by former Member of Parliament Heidi Alexander, who is leaving her position as MP for Lewisham East. MAG is approaching Heidi to welcome her to the positon and to establish good relations with her from the start. ‘We don’t want to lose the progress we’ve established at this crucial time in London policy-making,’ adds Lembit. ‘There are some tough conversations coming up, and I’m confident we’ll be able to address these in the positive spirit of cooperation which began with Val.’