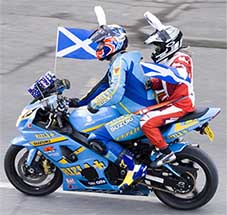 A fantastic turn out once again for this year’s run despite the bitter cold and the threat of snow.

Our new assembly point at the SECC has presented us with some challenges to fix for next year and the pace of the run itself was a bit slow but overall a successful day for Yorkhill.

Here’s the answers to the 2 main questions of the day.

How much money was raised?

On the day of the run last year roughly £16,000 was raised but the final figure was over £30,000 so the same will probably happen again this year.

How many bikes were there?

We would like to thank Strathclyde Police and Glasgow City Council (Scott Downey, Eddie Hutchison, Chris McCairns) for their support both on the day and during the planning of the run. Without their help the run would not have been able to take place.

Thanks are also due to Scottoiler Ltd for sponsoring the whole event.

Finally we’d also like to thank all the marshals and support staff who helped us on the day.

12th April – put it in your diaries now!

Go to the MAG Easter Egg Run website at glasgoweggrun.mag-uk.org

View the main video below – Filmed by A. Lenihan www.alenihanvideography.co.uk – Free on behalf of MAG/Yorkhill Childrens Foundation.