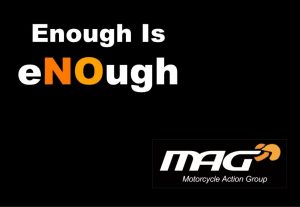 The Motorcycle Action Group (MAG) in London is calling on all riders to back the movement’s strong demand for action against the crime wave affecting both motorcycle riders and the general public.

Tim Fawthrop, MAG’s spokesman in London, is issuing a call-to-arms over the crime wave affecting riders in the capital and beyond which has directly harmed the motorcycling community – especially in recent months.

Tim says ‘I’m asking you to come and join our demonstration this Saturday, 9th September 2017, in London, to show the level of anger amongst riders regarding the continuing crime wave which has blighted biking over the last 12 months.  The ride begins at 10.30 am in Regent’s Park before proceeding to Parliament Square and then heading east. The route taken will ride through some of the areas most affected by motorcycle theft and moped-enabled crime.

Tim is speaking for every rider who’s been affected by the attacks and thefts.  ‘As anyone who follows the news will know, there were some terrible recent assaults on riders who were at work doing their delivery jobs.  The injuries to these victims are potentially life changing.  I know many riders who’ve been affected, and luckily a lot of the time the attempted thefts and assaults have not been successful.  But this is no way for riders to be treated in a theoretically law- abiding society.  The anger is at boiling point now, and it’s entirely understandable that riders want to strike back.  MAG continues to advise against vigilantism and invites all those who want to be heard to join the demo on Saturday.’

Previously, Tim has called on riders to share what they know about the criminals with police.  ‘The authorities can and should deal with them, but they need your information to do that.  Call the police now, and help to apply the weight of the law to these lawless and stupid thugs.  Let’s show a united front against bike crime, by turning out en-masse on Saturday.’