Many Oxfordshire motorcyclists already know that Oxfordshire County Council is conducting a survey regarding its future Local Transport and Connectivity Plan 5 and asks for responses to 28 papers on various aspects of the plan. 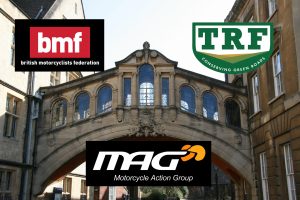 The 28th paper discusses motorcycling and appears almost as an afterthought, created only after Cherwell District Councillor John Broad raised issue with a lack of content relevant to motorcycles in the previous strategy document. The original version of the topic paper was so biased that Oxfordshire County Council revised it after significant pressure from Cllr Broad, motorcycle lobby groups and many local motorcyclists. The revised document still shows bias and misinformation, and none of the other topic papers even mention motorcycles.
Motorcyclists will be happy to know that, yesterday, representatives of the Motorcycle Action Group (MAG) , the British Motorcyclists Federation (BMF), the Trail Riders Fellowship (TRF) and Councillor John Broad (a member of both the BMF and MAG) got together in a “virtual meeting” to discuss the survey. We will be working together to ensure that we can each provide a constructive response to the survey. We also aim to keep motorcyclists informed in order that they may provide their own responses.
For the BMF, Anna Zee said “We cannot allow Oxfordshire County Council to create a transport plan which completely ignores a legitimate mode of transport.”
Speaking for MAG, Colin Brown said “There is no need for lobby groups to explain the bias: any motorcyclist will be able to see it for themselves by simply reading the document.  We urge all riders, whether they live in Oxfordshire or ride through it, to respond to the survey.”
The TRF said “Oxfordshire County Council currently seeks to deliver a ‘lack of transport plan’, which fails to protect the public interest. The Council has adopted an exclusive approach that focuses solely on a small proportion of the public whose transport needs are predominantly met by public transport, cycling and walking. The interests of those few are being championed to the disadvantage of the majority, whose transport needs are being treated with callous disregard. The Trail Riders Fellowship urges those who travel to, from, and within Oxfordshire to respond to the survey and demand that the Council stop bullying motorcyclists.”
Councillor John Broad said “I thought it excellent that motorcycling would be included as part of the county-wide transport strategy up to 2050, as the previous version only had one mention and that was the accident rate. When this document was released, I was appalled that the section on motorcycling had not been dealt with in a similar manner to the rest of the sections, showing a biased attempt to ban motorcycling from the County. The document does not achieve the objective of integrating all forms of transport and does nothing to look towards the future of transport in the County.”
We are asking other motorcycling bodies, businesses, clubs and individual riders to join us in lobbying Oxfordshire County Council to recognise the benefits of motorcycling, and develop a transport strategy that supports and provides for all legitimate transport modes.
The documentation and survey can be found at consultations.oxfordshire.gov.uk/consult.ti/ltcp.engagement/consultationHome
Contact MAG at 01926 844 064 or central-office@mag-uk.org