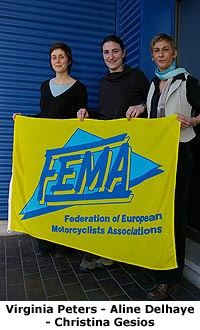 Interviewed and selected by a small committee in January, Virginie has officially joined the Brussels-based FEMA office in order to support its activities and lobby work and to promote and defend motorcyclists’ interests across Europe.

Virginie Peters has been attracted by motorcycling for many years. However, it was only in 2006 that she decided to buy her first motorbike, a Kawasaki Zephyr 550. Whether in the city or, ideally, on the roads to a holiday, motorcycling has become her preferred mode of transport.

Virginie is half Belgian half Danish. She grew up in Brussels in an International environment before starting a degree in European studies and German at the University of Edinburgh. She then returned to the so-called “heart of Europe” in order to complete a Master in International Politics.

During her studies, she had the opportunity to spend a year in Berlin as Erasmus student. She also travelled to several places around the world such as Thailand, Sri Lanka, Japan, Israel, or South Africa.

Being used to meet people from different nationalities, she describes herself as highly sociable and diplomatic and able to adapt herself to any situation. Native French speaker, Virginie has an excellent knowledge of English, whether spoken or written. She is also fluent in German and has a good knowledge of Dutch and Danish.

Before enthusiastically joining FEMA, Virginie had been working for nearly two years at the International Diabetes Federation (IDF), an umbrella organisation of 200 associations in nearly 160 countries. Although the two working fields – diabetes, on the one hand, motorbikes on the other – are completely different, parallels can nevertheless be made regarding the structures of both Federations and their commitment to political actions, raising public awareness, and lobby activities.

Virginie’s position as Media Relation and Communication Assistant at IDF has enabled her to acquire and improve several skills and qualities which will definitely be great assets at FEMA. The organisation of press events, coupled with permanent contact with member associations, corporate partners, and Government officials, has enabled her to develop strong advocacy and negotiation skills. She took part in several important promotional campaigns and lobbying activities at the European but also international level.

Virginie Peters is replacing Filippo Marino who has worked for FEMA since 2005.