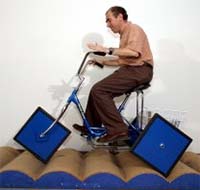 Motorcycle insiders say that the Motorcycle Industry is abuzz with excitement about a revolutionary new tyre design, dubbed as the biggest breakthrough since a patent for radials was applied for in June 1946.

The inventing team, at PuDont Labs, says their “secret” lies in jettisoning the traditional circular shape of a wheel.

This has been achieved by micro-robotic nanotechnology, which has meshed cutting-edge nylon-titanium composites into clusters of “nanoblocks” around the rubber – giving the tyre an unusual “squarish” shape.

According to PuDont’s Chief Scientist, K. Nityanananda, “when a vehicle begins to move, the slightest frontal acceleration forces ‘melt’ back the square nanoblocks into a circular profile, while an equally slight deceleration reverses the process, strongly.”

The result, he says, is an “exponential leap in road tarmac adhesion”, and an equally dramatic increase in frictional forces achieved while braking. All this, he asserts, is achieved “without any trade-offs in passenger comfort.”

The structural configuration of the new materials in the PuDont Tyre limits application to two-wheeled vehicles only – at least so far.

Under a campaign billed “Dare to Ride Square – Don’t be an April Fool” four volunteers will be selected after a lucky draw to test-ride the first PuDont Tyre equipped motorcycles.