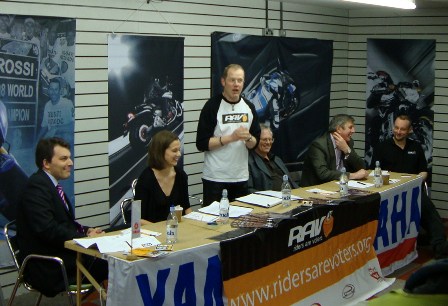 Salisbury RAV question time in Hayball’s Motorcycles, coincided with the first ever televised Party Leadership, but there was a full house of party representation and 65 riders there to hear the panel.

There weren’t 76 rules governing the RAV debate, but then there wasn’t live TV either, unlike our last event in Norfolk.

John Glen (Con) used to prepare William Hague for PMQs in the Commons and used some of those skills while debating against Trevor Carbin (Lib-Dem) and Rebecca Rennison (Lab). Trevor is our first QT candidate who used to work as a dispatch rider, so had a natural affinity with the crowd.

We were pleased to also have Steve Kenward on the panel, who is CEO of the Motorcycle Industry Association and Nich Brown from MAG.

Paddy Tyson, who was in the Chair, said “It was particularly interesting to note that John Glen (Con) is on the Board of the Centre for Policy Studies and is active in developing Tory policy. RAV really is lobbying at the highest level to get riders’ concerns heard.”

While enjoying the free tea, coffee and excellent buns provided by Hayballs, local radio carried out some interviews for broadcast the next day.

Rebecca Rennison (Lab) has agreed to go for a spin on a bike and says she is really looking forward to it.