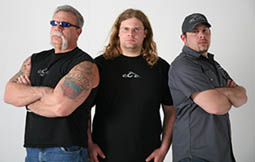 Peaceful springtime Hemsby is braced for an invasion of fans as stars of one of America’s biggest cult TV shows fly in next week.

The heroes of American Chopper will arrive in the village by helicopter at around 9am on Friday April 18th after a private jet flight into Norwich airport.

The story began when a customised motorbike manufacturing business, the Orange County Choppers, was founded in a New York basement in 1999 by metalworker Paul Teutul.

It became such a success story that it was turned into the reality TV programme American Chopper which runs coast-to-coast in the States and across Europe on the Discovery Channel.

All three stars of the show, Paul, his son Paul jr and Mikey, will be in Hemsby to mark the first birthday of the only store outside the USA to market the clothing and other themed products for the Orange County Choppers.

The store was set up in the seaside village as part of Karl Hickey’s Basic Box licensed product specialists business which was already based there.

“It’s absolutely amazing they are coming to Hemsby, of all places,” said Karl.

The American company started as an offshoot of the Teutul family’s steel business which began making customised Choppers from various pieces of machinery.

It grew so famously – producing bikes for customers like Microsoft and Coca-Cola – that by 2002 the idea was developed into a reality TV show which attracted millions of fans.

“It appeals to the Harley Davidson type fans and there will be theme Choppers from the show at the shop but I reckon that 75 per cent of the fans have never sat on a motor bike,” said Karl.

“They just love the show and want the T-shirts, sweaters, caps, boots and other products that their heroes wear in the show. We’re a bit like the Disney Shop for them.”

The stars expect to be in Hemsby for four or five hours for photos, autographs and to meet fans. But the shop, a one time “bucket and spade” store, will be carrying on the celebrations throughout the weekend.

PHOTO CALL: There will be opportunities for media to photograph and interview the Orange County Choppers from around 9am on April 18th.

Various discounts on the day and free tea or coffee for MAG members.

The shop is at Beach Road, Hemsby NR29 4HS