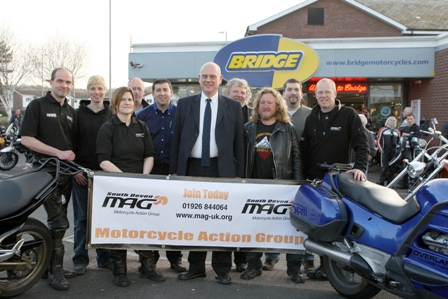 Riders from the South West crowded into Bridge Motorcycle’s Exeter showroom on Friday night to listen to, and ask questions of, Conservative MEP Giles Chichester as part of a Riders Are Voters event.

The event, organised by Motorcycle Action Group members from the area, including Jono Broad and John Groves in association with Lee and the team at Bridge, was a huge success and although emotions ran high on occasion, Giles Chichester said it really helped him understand the strength of feeling and the issues in question.

Those issues, all created by the EU Type Approval Regulation COM(2010)542, include the prohibition of modifications to a bike’s power-train and perhaps some cycle parts. Central to concern, apart from the fact that there is absolutely no evidential base for the proposal, is that since the Lisbon Treaty was signed, the technical heart of the proposal (which components will be affected) is to be contained in what are called ‘Delegated Acts’. These will be completed AFTER MEPs in the European Parliament have voted to accept them! Hence the uncertainty of exactly what will be affected.

Giles tried to explain where EU accountability lay and not surprisingly, had some difficulty, but he did compliment those riders attending, on their depth of knowledge of the issue, which he admitted was more than his own.

MAG is grateful to Mr Chichester for his attendance, who said it was possibly the largest public meeting he had experienced in his South West Constituency.

We are also delighted that the editor of RIDE Magazine, Colin Overland not only attended the event but also joined MAG as a full member.