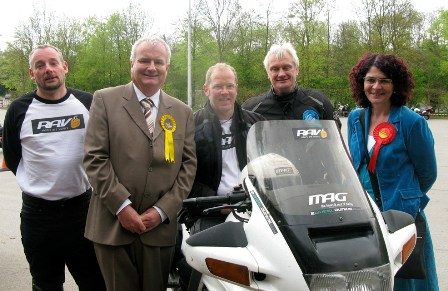 Hats off to Wayne Rooney of East Yorkshire MAG for organising the Humberside Freedom Run and RAV hustings event on May 1st.

It was a huge undertaking, but was executed superbly, from agreeing a route with the Police, to arranging TV coverage from both the BBC and ITV. It was the lead story on the ITV regional news that night and was on BBC news as well as BBC and commercial radio.

The Run left the Riverside Cafe in Beverley, where 400 bikes had gathered and it wound its way down and through Hull, before arriving at the Humber Bridge for the questioning of local politicians. The run collected riders all the way, swelling to nearly twice its original size by the time it reached the bridge.

The 3 main political parties were in attendance at the Bridge along with many riders who had chosen to gather there and not do the ride out. Two of the candidates were fighting to defend their parliamentary seats and one of these, the Conservative for Beverley and Holderness, Graham Stuart, was riding his VFR Honda. Diana Johnston (Lab) and Denis Healy (Lib-Dem) were competing directly for the Hull North seat and the event became the most raucous so far. It was also the best attended by a long way and could well have been the largest open air event of its kind in the whole election campaign.

After the event Graham Stuart (Con) got out his wallet and paid for MAG membership, the second candidate at a RAV event to do so.

The Run was drawing attention to the extortionate toll on the Bridge and to the Police’s Operation Achilles in the area.

Jol Lawson, MAG’s vice chair, led the Run all the way and the MAG Marshals did a fantastic job of ensuring the whole event ran smoothly.

2,500 riders then enjoyed a great celebration of biking back at the Into The Valley Rally, also organised by East Yorkshire MAG, where the Mayor of Beverley joined MAG too!