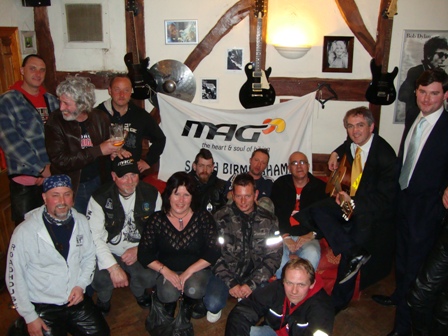 The local MAG group meeting is held at the Royal Oak in Studley, which is on the boundary of the Redditch and Stratford constituencies, so the Liberal Democrats sent both their candidates to meet nearly 40 riders.

Nicholas Lane (Lib-Dem Redditch) was first to arrive and fielded questions from the floor, until his party colleague, who was at another meeting, was able to attend.

A great night was had by all, with Martin Turner (Lib-Dem Stratford) ending the evening by serenading the voters with a guitar he took down off the wall of the pub. He actually plays in a band and was happy playing loads of old rock numbers to the crowd.

Both candidates had asked for the opportunity to meet some riders after the cancellation of the Stratford-upon-Avon Question Time meant they wouldn’t get the chance.

Picture shows just a handful of the MAG members present, with Nicholas Lane on the extreme right and Martin Turner with the guitar.