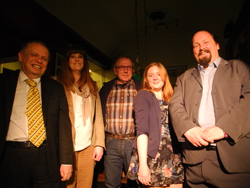 The debate covered topics including bike parking, deadly manhole covers, sentencing of drivers who injure or kill a rider, taxes and securing a level playing field with cyclists.  All the candidates expressed positive backing for MAG’s goals, and committed to continuing a dialogue after the General and Local Elections.

Paul Dore, who organised the debate, was pleased with how it went: ‘I was very impressed with the attendance.  Bikers made a good effort to be there and it paid off: all the parties represented were on side with MAG’s overall policy objectives to defend riders’ rights.  Scooter and motorcycle users can expect serious progress here, because these candidates said they’d carry on working with us after the votes are counted and whatever the result.  Given the importance of the local authority on these matters, that’s good news for anyone on any type of two wheeler.   For example, I’m confident we will now be able to get Council agreement to coating dangerously slippery manhole covers with a slip resistant product.  That’s going to prevent injury and death, and illustrates what MAG can do when we engage with our elected representatives.’

Lembit Opik, who is MAG’s Director of Comms & Public Affairs, added ‘Paul and his team did a great job of organising this event.  We’re getting serious commitments from candidates here, and that’s going to be good news for everyone who’s tired of being treated like a second class citizen just because you ride a bike.  We’re on a roll at the moment, and it’s exciting to see so much happening in ways which point to the future of MAG’s growing influence on behalf of riders everywhere.’