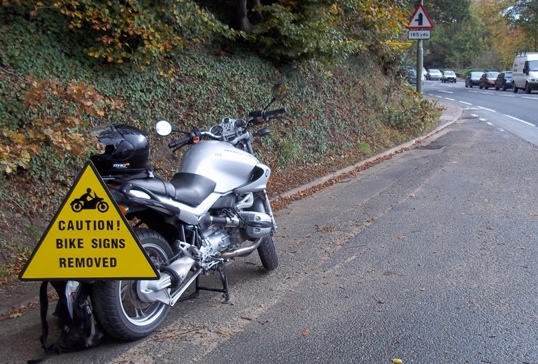 When South Devon MAG started as a fledgling group 2 years ago, it immediately began a campaign which has now reaped valuable rewards.

Devon County Council recently released its road traffic KSI figures which, rather disappointingly, have seen increases in most areas. Most areas except on four roads that is; the four roads that MAG campaigned for the installation of signs asking drivers to look out for bikes, to check their mirrors and to consider other road users.

Although it was a struggle, involving raising petitions etc, the local South Devon MAG group were adamant that the Council should reinstate the signs which already existed and had been used and approved previously.

The most striking reduction in casualties is on the A382 Newton Abbot to Whiddon Down and the A380 from Penn Inn to Kerswell Gardens, where casualties fell from 6 in 2010 to 0 in 2011 and 5 to 1 respectively.

With plenty of local media coverage, MAG is continuing to improve its standing and respectability in the area, being invited to sit on local forums etc, to ensure the riders voice is heard.

“The Motorcycle Action Group welcomes Devon County Council’s initiative to ‘sign’ various motorcycle accident black spots. The type of signs and their wording have been designed to raise awareness of potential risks to both riders and drivers and rather than the negative messages some other councils use, we feel these signs show that motorcycles are welcome on Devon’s roads and encourage harmony between all road users.”

Given that these were motorcycle accident blackspots, MAG hopes that other local authorities will consider these results, which clearly demonstrate where they should be directing their educational efforts. When road users consider motorcycles and take the time to look for us, incidents are avoided.

South Devon MAG, particularly Clive, Jenny and Roy, deserve acknowledgement and thanks for all their efforts and dogged determination, from letter writing to day-long vigils at the accident blackspots with facsimiles of the signs and collecting signatures.